Unlike those picture puzzles where you are asked to find subtle differences between images, a look at the NASA sea surface height anomaly images for the past three weak La Niñas (1995, 2000, 2011) plus this year (2016), leaves little doubt that what's going on in the eastern Pacific is not subtle at all.  The most striking difference is the anomalous warm water from the equator north to about 25 degrees north. This area warmed in conjunction with last year's very strong El Niño and may have contributed to the atypical winter along the west Coast of North America (see "Differences Between 2015-16 El Niño and Previous Strong and Very Strong Events"). 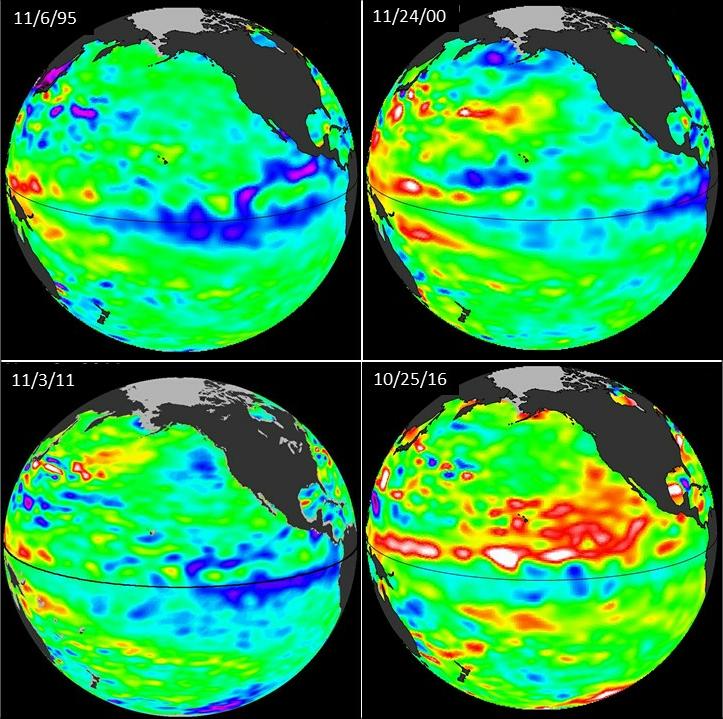 With the current Oceanic Niño Index (ONI) already at weak La Niña levels, tomorrow's updated CPC ENSO Advisory is likely to up the odds for a La Niña this fall and winter. But can we still use the standard "La Niña playbook" of looking at past events as an indicator of broad-scale for West Coast precipitation patterns for this winter?  Last winter the conventional wisdom for the impacts of a very strong El Niño did not work out per previous events. Consequently, it looks like extreme caution should be exercised in looking for patterns based upon the climatological past related to the prospects for current La Niña.