Too little, too late?

CPC has upgraded their El Nino Watch to an El Nino Advisory <http://www.cpc.ncep.noaa.gov/products/analysis_monitoring/enso_advisory/ensodisc.html>, but with only a 50-60% chance it will persist through summer.  The upgrade is despite the ONI dipping from +0.7 to +0.6. <http://ggweather.com/enso/oni.htm> and during a time of year when the influences of El Nino are waning.


An excellent analysis of these potential impacts can be found at http://www.climate.gov/news-features/blogs/enso/march-2015-enso-discussion-el-ni%C3%B1o-here.

In general the Golden State saw a dry and warm February.  Average maxima at Eureka was "only" 3.4 degrees above, while the remaining key cities ranged from 5.4 (San Diego) to 8.4 (Redding) above normal. See http://ggweather.com/calif/feb2015.htm

February 2015 rainfall generally ranged from more in the north to less in the south.  Eureka was 90% of normal while San Diego totaled only 8% of normal with most locales in the middle between about 33% to 66%. See http://ggweather.com/calif/feb2015.htm

Correspondingly, season to date rainfall numbers slipped; but on the weight of our very wet December they are still better than some of the previous years.  SF Bay Area season to date numbers are mostly between 90% and 110% of normal, while statewide key cities percent of nomal values range from 75% to 99% of normal. See  http://forecast.weather.gov/product.php?site=NWS&product=RR4&issuedby=MTR

What a difference a week makes! If the AT&T Pebble Beach Pro-Am Golf Tournament had been played last week it would have been what many think of as "typical Crosby weather".  In fact, it has only rained on 58% of the years during the tournament.  See http://ggweather.com/pebble.htm for a year-by-year breakdown of rain during this event.

This year it will picture postcard weather with temperatures in the low to mid-70s.

With 0.01" of rain being recorded this morning between 08:00 and 09:00 am the dry spell in downtown San Francisco has ended at 43 days. The last measurable rain in SF was recorded on December 24, 2014 making this the second longest winter dry spell since records began during the Gold Rush in 1849. The record is 60 consecutive days set between November 17, 1876 and January 15, 1877. 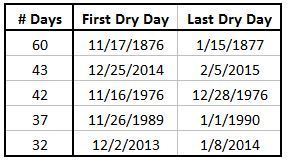 Born in America, he trained as a physician in England and was the Surgeon General for British Forces in North America during the Revolutionary War.  Historically he is best known in his era for the first balloon flight across the English Channel with Frenchman Jean Pierre Blanchard  on January 7th 1785. 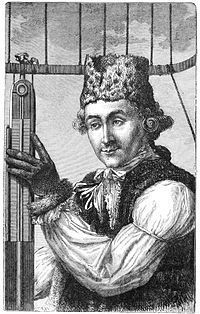 Below are a number of links relating to Atmospheric Rivers (ARs). These relatively narrow (~240 miles) slow moving bands of subtropical moisture account for between 30% and 50% of the rainfall occuring along the West Coast. Many of Washington, Oregon and California's historic flooding events have been related to ARs. They are also colloquially known as the "Pineapple Express" because some of their moisture originates from the vicinity of the Hawaiian Islands.

To illustrate the roller-coaster ride of both rainfall and reservoir storage in California, see the following three graphics from the 1st day of the month for December 2014, January and February 2015.

For example, the 8-Station Index for Northern Sierra Nevada Precipitation went from 86% of normal on December 1, to 127% on January 1 and back to 86% on Feb 1st. Most other metrics statewide saw similar swings. Groundhog Day has its roots in an ancient Celtic celebration called Imbolog. This date is the midpoint between the winter solstice and the spring equinox. In an agrarian society that was very dependent on the weather, this was a time to celebrate having made it halfway through winter. The superstition arose that if the weather was fair on Imbolog, the second half of the winter would be cold and stormy, but if the weather was cold and overcast or stormy, the second half of the winter would be mild.

The Romans learned of this tradition from the Celts, and eventually brought them to the area that would become Germany. Eventually German immigrants brought these beliefs to Pennsylvania. Their tradition of predicting the weather became centered on the woodchuck, or groundhog, and if he could see his shadow, there would be six more weeks of winter.

A newspaper in Punxsutawney, PA helped keep the tradition alive and in 1887 declared Phil as America’s official forecasting groundhog. As the story became embellished each year the other newspapers picked it up and the rest as they say is history. Regionally there have been a number of other furry rodent contenders such as General Beauregard Lee of Atlanta, Sir Walter Wally in Raleigh, NC and Jimmy of Sun Prairie, WI.  And in 1993 the motion picture "Groundhog Day" popularized the event even further.

NOAA's National Climatic Data Center's look at this tradition and some of the associated climatology is at http://www.ncdc.noaa.gov/customer-support/education-resources/groundhog-day

Today it has been reported that Punxsutawney Phil did see his shadow this morning (despite a Winter Storm Warning still being in effect) and forecasted six more weeks of winter for 2015.

Across much of Northern and Central California there has been little if any rain this month and monthly totals will wind up at or near long term records.  Below are the 15 lowest January totals for each station's period of record.


Looking at San Francisco, note that three of the five driest years are in the top five.  This has brought the average for the past ten years down to 3.03, dramatically lower than the 30-year normal of 4.55 inches. In San Francisco, January 19th begins the second half of the July 1 to June 30 rainfall season.  A few other cities in Northern California reached their halfway point in the past few days and most of the state will exceed it in the next week.